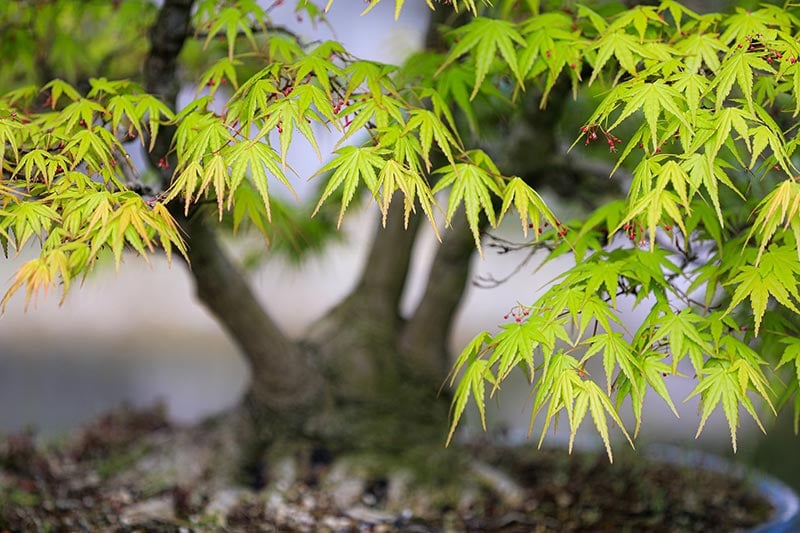 Home » Plants » How to Grow and Care for Japanese Maple

The Japanese is Maple native to Japan, where it has been widely cultivated for centuries. They were brought to Europe in the early 19th century and have continued to be bred into hundreds of beautiful cultivars.

Japanese maple trees are deciduous, perennial trees. They are attractive with bright foliage that changes color throughout the year. They are simple to grow and care for, too, so they make a low-maintenance addition to your landscape as a tree or a shrub. Be sure to plant your Japanese maple somewhere where it will receive some shade. It does not tolerate continuous sunlight well. An area where it will receive only morning light is preferred. It is tolerant of many types of soil, provided that it is well-draining. Prune your tree, if needed, during the dormant season. The most care your tree will likely need is making sure it has enough water during the summer when it is hot or if there is not enough natural rain.

Even though these plants are simple to care for, there are some tips about their care, preferences, and growth cycle that are helpful to keep in mind. Do these things and you will have a healthy Japanese maple that will brighten up your yard year after year.

The Japanese Maple (Acer palmatum) is a tree known for its bright red leaves in the fall. It is often planted for ornamentation because of its eye-catching color. Though red is the color its leaves are most commonly known for, the leaves also come in green, yellow, orange, and purple. They make excellent lawn trees. But they can be grown as shrubs, container plants, and even bonsai trees.

The name Japanese maple does not refer to just one species, but rather the whole Acer species native to Japan. This species has been cultivated for centuries. And today, there are over 300 cultivar options from which potential landscapers can choose.

How to Grow Japanese Maple

Japanese maples grow best in USDA plant hardiness zones 6-8. Some varieties are sturdier and can tolerate zone 5. Their delicate leaves can be prone to sunburn if they receive too much light. They can also be sensitive to excessive wind and extended warm temperatures. Too much wind combined with high temperatures can dry out the leaves and scorch the trunk and branches.

This scorching is more likely in young trees, in particular. The trees do become more tolerant as they age. Try to plant your Japanese maple somewhere where it will be protected from the wind.

Japanese maples tend to leaf early, so be sure to also protect them in the case of a late frost in the Spring. To protect them from frost, cover them with a cover for outdoor trees, burlap, or tarp.

Any type of soil is usually fine for Japanese maple trees, but it does need to be well-draining.

As with any plant, you want to be sure your tree is never in standing water for extended periods, as this can rot the roots. When you first plant your tree, a layer of sphagnum peat or some other organic matter in the hole will help with drainage. This organic matter will help sandy soil retain moisture and also helps break up clay soil to allow it to drain better.

A layer of mulch can help the soil retain moisture throughout the summer, but be sure to keep it away from the base of the tree to prevent root rot.

Japanese maple trees should only be fertilized after they are at least a year old. Then, do so in the later winter or early Spring. They are slow-growers, so be sure to use a slow-release fertilizer.

Japanese maples vary slightly in height depending on their cultivar. Upright trees will grow, on average, to be 15-25 feet tall and wide. There are dwarf Japanese maple trees and weeping varieties that are smaller. Shrubs varieties are smaller, too. They typically grow to be around 4-5 feet in height and spread.

Young trees exhibit a more medium growth rate. This means they can grow 10-15 feet in 10 years for the average tree cultivar. As the tree ages, it grows more slowly. Full-grown, they reach 15 to 25 feet on average, though they can grow up to 40 feet. This size will vary, too, among varieties.

The most care your Japanese maple tree will likely need is providing enough water during the summer or when there is not enough natural rain. Consistent watering is especially important when they are young and establishing themselves. Japanese maple tend to become more resilient as they age.

If you like, you can cut back on the amount of water you distribute in late summer to encourage brighter color in the fall bloom.

Propagation by seed is simple and can be done by most individuals at home. Simply collect seeds from the tree in the fall after they ripen. You can tell they are ready to collect when they turn brown.

Japanese maple seeds have a think exterior. Left to their natural devices, it can take up to two years for them to germinate on their own.

This process can be sped up at home. Follow the below steps:

You can plant your seeds directly outside, provided that it is the right time of year. Water them thoroughly. But do allow the soil to dry out before watering again.

Be protective of young plants to be sure they do not receive too much sunlight.

Grafting is considered to be the most widely accepted method of propagation for Japanese maples. It is done by melding a rootstock and scion of two existing plants together. Typically a scion is taken from a cultivar and bonded with an existing rootstock.

Its recommended that this process take place in the winter. And the trunk of the existing rootstock must be at least .25 cm.

Most nurseries graft Japanese maples in-house. This means you can purchase an already-grafted plant easily at your local nursery or online.

Generally, Japanese maple trees do not require a lot of pruning. If you need to prune your tree, do so in late winter before the leaf buds open. Prune away interior branches or stray branches, but be sure to keep the structural branches untouched. You can do light cosmetic pruning at any point throughout the year if desired.

Japanese maple trees also produce small red flowers that bloom on the tree in May or June. They are grown in clusters. These flowers become winged samaras, which are fruit from which the seed develops. These ripen in the fall (September or October) and are spread by the wind.

Japanese maple trees have mostly smooth bark that is typically gray or green. The trunk is slightly fluted, meaning it has slight grooves or ridges present. Japanese maple trees do not produce any thorns, so you do not have to worry about sharp protrusions harming little hands or curious pets.

Japanese maple tree roots are not invasive. They tend to have shallow root systems that stay nearer to the surface than other trees. It is still good to do your research on how large your particular variety will likely grow, as this does vary.

Maple tree roots often extend beyond the spread of the tree as they seek nutrients and water. So, it can impact their health if they are too close to a home foundation.

It is always best practice to avoid planting large trees in areas where they might disrupt utility lines or pipes.

Diseases are not common in Japanese maples. And they rarely have trouble with pests.

Aphids can sometimes affect maples. You may notice this if the tree’s leaves begin to drop at unusual times or if there is honeydew on the lower leaves. Scales can also show up on Japanese maple trees. You’ll notice them by cottony webbing on the underside of branches.

You can get rid of both of these pests, if needed, through natural oils or sprays.

There are many different uses of Japanese maples traditionally.

There are hundreds of Japanese maple cultivars. Below are just a handful of notable ones you might consider when planting your own.

Japanese maple trees are attractive trees with bright, eye-catching foliage. They are very simple to care for and come in many different varieties. This makes them great landscaping trees, as well as container shrubs.

Have any questions or comments about this article? Drop us a note in the comments below.

Check out these other beautiful Plants