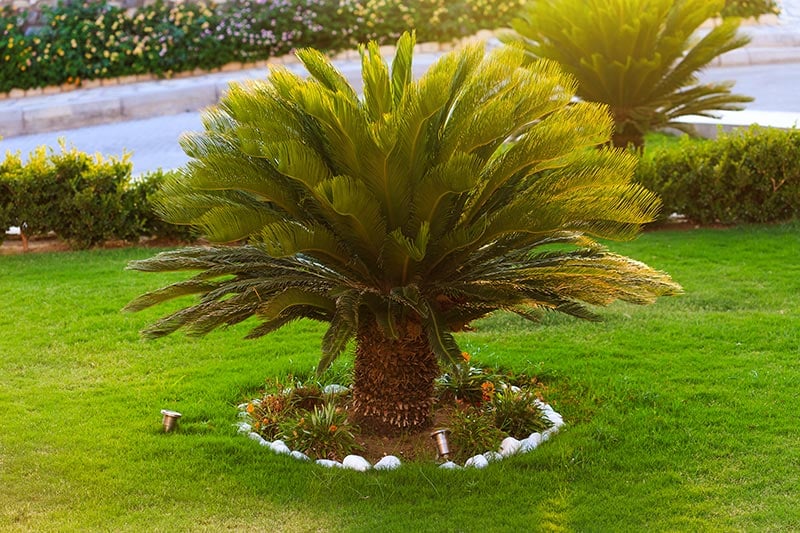 Home » Plants » How to Grow and Care for Sago Palm

The Sago Palm (Cycas Revoluta), is a prehistoric plant native to Japan and Southern China. While the name suggests that this plant is part of the palm family, it is actually a cycad. Cycads are tropical plants that grow from a trunk and don’t branch out—the foliage of the Sago Palm sprouts from the crown of the plant in fronds. The leaves are deep green and feather out, similar to that of a fern. Sago Palms can seem intimidating because tropical plants need tropical environments. If you meet a few simple care requirements, they can be relatively easy!

To keep Sago Palms happy, make sure they receive an adequate amount of filtered sunlight. Direct sun will cause the foliage to burn and wilt. They’re slightly drought resistant, so they can handle an irregular watering schedule. The watering schedule will vary based on climate and if it’s planted indoors or outdoors. Sandy, nutrient-rich soil is best, so you can keep your Sago moist without it getting soggy.

Sago Palms prefer warm, humid climates. They thrive outdoors in these environments. For cooler temperatures, they make excellent house plants. This makes them a fabulous addition for any plant enthusiasts with a bit of practice and patience.

About the Sago Palm

Sago Palms date back to the early Mesozoic Era and can live for over 100 years. They are slow-growing. It can take around 50 years for Sago Palms to reach their max height. In the wild, this is anywhere between 10 and 20 feet. They are smaller in containers and only reach a max size of around 2-3 feet. Sago Palms also only produce one new frond each year. So don’t be discouraged if your plant isn’t growing as fast as you would like. The fronds grow from the plant’s crown and fan out in a circular pattern. These leaves are deep green, shiny and palm-like. Over time, these leaves can grow anywhere from 1-5 feet long. Sago Palms don’t flower but instead produce large cones. They’re dioecious plants. This means the plants can be male or female, and they pollinate to reproduce.

How to Grow a Sago Palm

Sago Palms grow from seeds harvested from the female plant. If you’re growing from seed, be prepared to wait. It can take the seeds around 3-4 months to germinate. These large, orange seeds should be pressed into a sandy soil flat side down in a tray. Keep the tray in a warm location and make sure it stays moist. The seeds can be transferred to a pot after sprouting. To ensure there is enough room for growth, only plant one seed per pot.

Sago Palms can be kept outdoors or as house plants. They are best grown outdoors in USDA zones 9-11. They’re not particularly hardy and can’t handle freezing temperatures. If you’re in a cooler environment, it’s best to plant Sago Palms in containers. This makes it easy for them to be brought indoors during the cooler months. When planting into the ground, it is best to plant a transplant rather than grow from seeds.

The best place to plant a sago palm outdoors is in a sunny, partially shaded location. Sagos can withstand some direct sun, but it can damage the plant if they receive too much or get too hot. It’s also essential to plant them in a well-draining area with sandy nutrient-rich soil. Another factor to consider when planting your Sago Palm is space. They’ll need optimal room in order to reach their full potential. It’s best for them to have a space with at least an 8-foot diameter to ensure they aren’t overcrowded. When planting your Sago Palm, dig a hole that is double the width and at least 6 inches deeper than the current plant container. Be sure to fill the hole with about 6 inches of a sandy soil mixture to support the root ball. It’s best to have the plant be level with the ground.

How to Care for your Sago Palm

Sago Palms are considered slightly drought resistant. This doesn’t mean you want to slack on a watering schedule, though. Watering is one of the most critical care factors. They prefer to stay moist but not soggy. Too much water will lead to root rot. Climates that receive around 9 inches of rainfall per year allow Sago Palms to thrive. During droughts and heatwaves, it is essential to keep up a regular schedule. Water every 2-3 weeks to ensure the soil is staying moist.

A more routine watering schedule is needed when Sago Palms are kept as house plants. You’ll want to water the plant every 2 or 3 weeks during the growing season. In the cooler months, reduce watering to around once a month. Ensure the top layer of soil has dried out before watering. It’s always a good idea to place a finger into the soil to test before watering. Sago Palms suffer when overwatered.

These plants aren’t too picky when it comes to soil. However, there are a few tips to keep in mind if you want your Sago Palm to thrive. A well-draining soil is a must for Sago Palms. They prefer nutrient-rich, sandy soil that is slightly acidic (pH of 5.5-6.5). You can add some fresh compost or sand to get your perfect blend. Palm mixes will do the trick for container plants.

Fertilizing isn’t a necessary step for Sago Palms. It can be used to encourage growth and vibrancy, especially for container plants. If you choose to fertilize, there are a couple of options. Use a diluted water-soluble fertilizer once a month during the growing season (April-October). Or you can add a slow-release fertilizer to the soil every 2-3 months.

Sago Palms thrive in bright, indirect light. It’s important to consider location when planting outside. Too much direct sun and heat will cause foliage to burn and wilt. The plant will grow best in a place that receives dappled sunlight. When keeping a Sago Palm as a house plant, it will need around 4-6 hours of filtered sunlight each day.

Sago Palms are native to warm, humid environments. They make lovely landscape plants in USDA zones 9-10. Outside of those zones, they’re great container plants. Remember, they’re a tropical plant, so they aren’t particularly hardy. Sago Palms can’t withstand temperatures below 30 degrees Fahrenheit. When grown outdoors in their preferred climate, these plants are easy.

There are a few things to keep in mind when growing a Sago Palm indoors. Keep temperatures around 65-75 degrees Fahrenheit and humidity levels over 50%. Brown tips are a sign your Sago Palm needs more humidity. To increase humidity levels, mist the plant with fresh water several times a week. Or place the container on a pebble tray filled with water. Make sure the bottom of the pot isn’t touching the water to avoid root rot.

Since Sago Palms grow slowly, there isn’t much need for pruning. Leaves will die occasionally, and these should be removed. Make sure they’re brown and dried out before removing. Yellow fronds shouldn’t be removed. Despite their appearance, they are still alive and absorbing nutrients. Pruning should be done at the end of the growing season with sanitized pruning shears. While pruning, remove any withered stalks or ‘fruit.’

Great news! Pests and diseases aren’t a common problem for Sago Palms. It is a possibility for spider mites, mealybugs, and scale to occur. Large infestations aren’t a problem, so a natural insecticide like neem oil should do the trick. Always read the directions before applying. Since Sago Palms aren’t prone to diseases, you really only need to worry about root rot. Make sure the soil is draining well to avoid it.

Sago Palms are toxic to both humans and pets. The plant produces cycasin which is primarily concentrated in the seeds. Still, all parts of the plants are poisonous—symptoms of ingestion range from vomiting, diarrhea, and seizures to liver failure and possibly death. Signs of ingestion usually appear within 12 hours. In pets, keep an eye out for bruising, nosebleeds, and bloody stool.

Reproduction of the Sago Palm

As mentioned earlier, Sago Palms are dioecious and reproduce through pollination. It’s important to note that there are male and female Sago Palms and the differences between the two. Male Sago Palms produce cones. These cones appear in late spring and are anywhere between 12 and 24 inches tall. Female Sago Palms grow a basket-shaped ‘flower’ that contains large reddish-orange seeds. When the female ‘flower’ is ready to be fertilized, the leaves will open up. Pollination of mature Sago Palms occurs naturally with wind or insects carrying pollen from the male to the female. It is a reminder that Sago Palms are slow-growing and that it can take over ten years to reach maturity.

Fertilized seeds from female plants can be propagated. If you want to propagate by seeds, refer to the section on growing Sago Palms earlier in the post. Sago Palms can also be propagated by division. The plants will often produce pups – little sprouts of a new plant growing near the base of the plant. These pups can be dug up and replanted. It’s best to divide during the spring or fall. It is best to dig up any pups while they’re still small. The larger the pup grows, the harder it will be to transplant.

An edible starch is produced in the stems of Sago Palms. This starch was a valuable resource that helped many survive famine. Since the plants are very toxic, the islanders had to learn how to prepare the starch. It’s an in-depth process that can take several weeks. The pith is removed from the plant and ground into a flour-like consistency. After this, it is thoroughly washed and dried several times to remove the toxins. It sounds like a lot of work, but it was worth it for them to survive desperate times.

Caring for and adding more plants to your home and garden can feel intimidating. Sago Palms quite literally last a lifetime and are relatively easy with the right conditions. They’d be the perfect addition to add a tropical look without a lot of maintenance. If you have any questions about growing your own Sago Palm, feel free to comment below.

Check out these other beautiful Plants