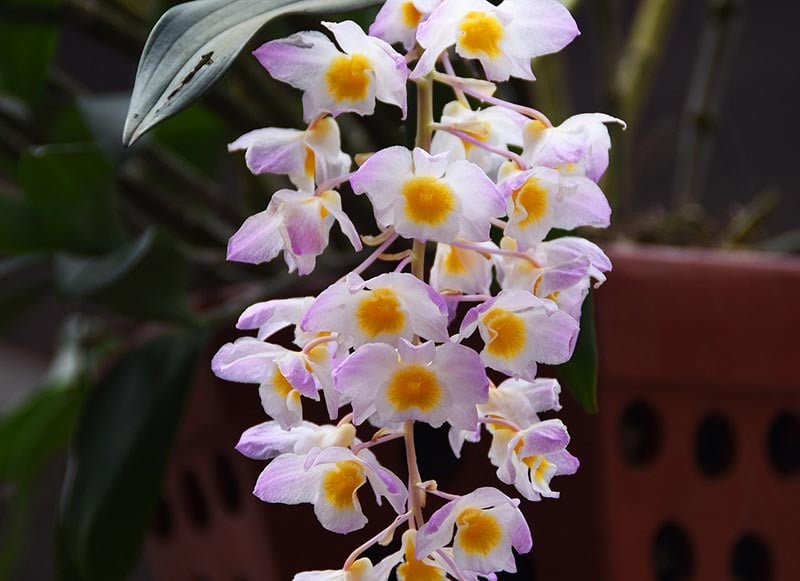 Home » Plants » Flowers » How to Grow and Care for Dendrobium Orchid

The Dendrobium genus of orchids is a diverse group of orchids that has nearly 2000 species. Its popularity has led to the cultivation of many hybrids.

Dendrobium orchids are a great addition to your home. Their beautiful flowers bloom several times a year, making them attractive houseplants.  They are one of the easier orchid groups to care for, but they do have specific environmental and care needs to them healthy. Keep your orchid in a small pot to keep the roots bound. Water your dendrobium orchid only 1-2 times a week (at most) during the growing season and keep it warm and exposed to humidity. Be sure not to crowd it with other plants to make sure it has good circulation. Prune your orchids after they bloom to promote new growth and keep their flowers coming back throughout the year.

Because there are thousands of species of dendrobiums, they can vary slightly in what care they prefer. But they do have some similarities and general care requirements, which we will explore below.

Dendrobium orchids are native to southeast Asia. Although, they also grow in many different areas of the world.

They are epiphytic plants when they live in the wild, which means they grow attached to other plants. In nature, they often grow on trees, rocks, or stones. Dendrobium orchids, as a whole, encompass a large variety of orchids.

In general, they are broken down into two different types of dendrobiums – ‘hard cane’ and ‘soft cane.’

Hard cane dendrobiums are characterized by their tall pseudobulbs. These are thin, with dark leaves. They are evergreen and generally keep their leaves for several years before growing new ones. With hard cane dendrobiums, their flowers come from spikes that appear at the top of the cane.

Soft cane dendrobium orchids are more well-known and more popular. The flowers, unlike hard cane plants, grow directly from the plant’s canes, rather than a spike.

When you plant your orchid put it in a small pot. Orchids prefer smaller areas that compact their roots. This preference is due to their epiphytic nature. They produce smaller root systems so they can thrive in smaller environments.

Choose a pot that is no more than 1 inch larger than your orchid’s root system.

When you plant your orchid, be sure to use soil that has been mixed specifically for orchids. The most popular mixture used for orchids is usually fir bark.

Fir bark is extremely well-draining and it deteriorates slowly, so you can likely wait up to two years before repotting.

There are other mixtures developed specifically for orchids. You can mix your own, as well. Other mixes include various ratios of peat moss, perlite, or pine bark.

Overall, the most important element is that the soil mixture is well-draining and is perforated with air holes. This perforation will keep drainage high and keep the roots out of sustained exposure to moisture.

Do not cut off old canes, as they store nutrients for the plant. Old canes might also produce keikis, which can provide new orchid plants for you.

Dendrobiums typically bloom for 6-8 weeks or about three times a year in a proper environment. The different varieties of dendrobiums have flowers available in a wide range of colors, shapes, and sizes. They usually have anywhere from 5-20 flowers, some that are quite fragrant.

It does not harm the orchid if you want to cut the sprays for a flower arrangement. When the plant is finished blooming, prune the sprays at their base (where they connect to the cane). If you do not do this, your plan may not bloom again. If you have pruned your sprays and your orchid continues not to bloom, this could be for several reasons.

Poor lighting, improper temperature, or lack of nutrients can all affect an orchid’s ability to bloom.

Repotting your orchid usually needs to be done only every 2-3 years as the soil mixture deteriorates and loses nutrients.

You may also need to repot your plant if it begins to outgrow your current pot. You will notice this is happening when the canes of the plant begin growing outside of the edge of the pot.

Dendrobium orchids must be by bright light indoors. They require a lot of light but not direct sunlight. Choose, if possible, a south-facing window, perhaps slightly shaded. This light will emulate the bright, partial sun that the dendrobium orchid receives in nature.

They can survive in lower light conditions. But they may not bloom as well or at all. Sometimes, orchids will produce keikis, which are tiny growths on their canes. In Hawaiian, the name translates to “the little one.” These keikis can be removed from your orchid and planted on their own.

However, the production of keikis is most often due to stress on the plant and can mean that the plant is not getting enough light. On the other hand, if your plant’s leaves are yellowing, it means it is getting too much light.

Pay attention to your plant and your care habits, and adjust accordingly.

These plants are temperature adaptable, growing in hot and humid regions to cool mountain ranges. But they prefer warm climates. Environments with temperatures above 60 are the best for dendrobium orchids to thrive.

They can bounce back from slightly colder temperatures, but any prolonged exposure to the cold will harm them permanently. In addition, high humidity is better for your orchid. This typically means somewhere between 50-70%.

If your orchid’s leaves are turning brown, that can be a sign that the air is too dry. Increase your orchid’s humidity exposure as soon as you can.

If you live somewhere where the air is dry, consider getting a humidifier for your orchid plant’s room. You can also place a small tray with pebbles beneath your orchid with water in it to increase humidity. Be sure, if you do this, that the pot is not sitting directly in the water. If your orchid is sitting in water, it will cause the orchid’s roots to rot.

Circulation is also important for your orchid. A lack of it can cause fungus to grow or pests to develop. If you are concerned that your orchid is not getting enough circulation, try keeping it in a room with a fan. You can also purchase a small fan to place nearby.

Dendrobium orchids need consistent watering to keep them healthy, but they do not handle overwatering well.

Consider purchasing a moisture meter to help you determine how wet or dry your orchid’s soil is. You can also use your finger to determine if your orchid needs to be watered. To do this, push it about one inch into the orchid’s potting mixture. If it feels dry, water it. If it’s still wet, then wait longer for it to dry out.

Watering your orchid twice a week is average, but this will vary depending on sunlight, air movement, humidity, and temperature. As you move beyond the growing season and into fall/winter, your orchid will need less water, but do not let it dry out completely. It is recommended that you water your orchid in the morning. This will allow the leaves to dry before nighttime.

A good way to water your orchid is to soak the moss in water. Alternatively, let the water run through the plant thoroughly, allowing the water to drain from the bottom. Yellowing leaves can be a sign both of too much or too little water, so pay attention to your plant and your watering habits to adjust accordingly.

Fertilize your orchid only during growing season months (spring and summer).

There are fertilizers specially made for orchids. Follow the directions on the packaging for the proper amount to use for your orchid. During the active months, fertilize every two to three weeks. In the winter, once a month is enough.

You can divide your orchid if it has at least four healthy canes. To do this, use a sharp knife to cut through the rhizome and root mass. Do try to keep the root mass as intact as possible. Lift the orchid divisions from the potting medium and cut off any long or dead roots.

Place both new plants in a properly sized pot, with orchid potting medium. And situate it so that the plant base is just below the potting mixture (about ½ an inch). Wait a week before watering it thoroughly. Though it is not truly propagation, old canes might also produce keikis. These tiny orchids can be separated from the can and planted on their own. Be sure to wait until their roots develop before doing so.

Typically, keikis should be left on the mother plant until the roots are between one and three inches long. Once they are, you can detach them by cutting one to two inches down the spike that the keiki’s roots are wrapped around. Plant owners should note that typically, these keikis are produced by the mother plant when it is under stress. It may be a good sign that something in your care routine needs to be adjusted.

There are thousands of varieties of dendrobium orchids. Below are just a couple of unique varieties for you to consider.

Some orchids may be prone to petal blight. Petal blight is a fungus that will affect the flowers of your orchid. You will notice it from the small circular spots on the flowers. These types of fungal diseases can be common due to the number of humidity orchids needs to live happily.

If you see this, remove the infected blossoms and increase air circulation around your plant. Brown Leaf tips can also appear on your plants. This browning can be from too much fertilizer, not enough humidity, or inadequate watering. Yellowing leaves also can be from too much sunlight or improper watering habits.

As always, pay attention to your orchid and your habits to identify what the issue is.

The ASPCA has identified dendrobium orchids as a plant that is not considered toxic to animals. They are not toxic to humans either. However, they can cause some discomfort to the stomach if ingested. It is best practice to keep your orchid out of reach of your children and animals.

The dendrobium orchid encompasses a variety of shapes, colors, and sizes of orchids. But there are standard care tips that you can do to keep your orchid variety happy and healthy.

Keep your orchid in a warm and humid environment, give it plenty of partial sunlight, and keep it in a small pot to keep its roots compact. You may run into pests or diseases, but keeping the air around your orchid well-circulated will help prevent this.

What did you learn about dendrobium orchids? Let us know in the comments below. We also want to hear if you have any questions. We look forward to hearing from you!

Check out these other beautiful Flowers