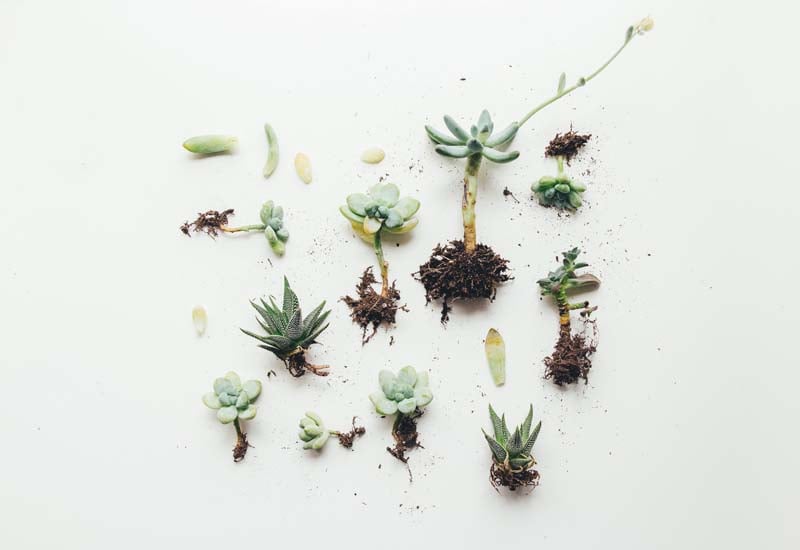 Home » Plants » Succulents » Aerial Roots on Succulents: What to Do?

Have you noticed your succulent beginning to grow tiny, thin little extensions from its stem? These are called aerial roots and, if you own succulents, you will likely at some point find yourself confronted with them.

We will walk you through all the reasons your succulents might have grown these tiny roots and what to do if you notice them. Keep reading to learn more!

What Are Aerial Roots?

Aerial roots are small, soft, tiny roots that grow off of your plant in the air rather than in the soil. They occur in succulents but also can occur in trees and other epiphytic plants.

These roots are part of a subcategory of roots called adventitious roots. Adventitious roots are known for growing on any part of the non-root tissue of a plant. They can appear during normal plant development as well as when the plant is stressed.

A succulent will grow aerial roots when it looks for something that it is not receiving from its regular root system. This growth could fix the problem, or it may require more attention from you.

Aerial roots have tiny pores that can absorb water, air, and nutrients from the environment around them. Sometimes, these roots can be a response to the plant’s environment as an effort to absorb one of these things.

Not all succulents have the ability to grow aerial roots. Aerial roots tend to occur in fast-growing succulent varieties with a stem, like sedums, mother of thousands, or echeverias. You likely will not see aerial roots on aloe or haworthias.

If the variety you have does produce aerial roots, you will most likely see them appear during the growing season.

Are Aerial Roots on Succulents Bad?

Aerial roots on succulents are not necessarily bad.

Aerial roots can be a regular part of plant development. But it can also mean that there is something in your succulent care that needs to be changed. So, if you notice them, take stock of a few things in your succulent’s environment to be safe.

Typically, when your succulent grows aerial roots out of stress, it is not getting enough water, and the environment is humid.

If your succulent is not getting enough water or if it is not being watered deeply enough, it may begin to look for it elsewhere. Remember, succulents love deep, infrequent watering. Aerial roots form, in this case, to help your succulents pull in moisture from the air.

In the same vein, if your succulent is in a humid environment, it may respond by growing aerial roots to pull moisture from the air as a natural response. This response could be harmful for your plant if it is already receiving enough water.

Try moving your succulent somewhere drier or placing a fan nearby to help move the humid air around.

Aerial roots can also grow even if your watering habits are fine and the humidity is okay. In the latter case, the succulent is just taking advantage of an opportunity to absorb water.

Make sure your succulent’s leaves are plump with water. And check it for other signs of underwatering to help determine if it is getting enough hydration. Other signs that it is not getting enough water could include browning lower leaves or wrinkling leaves.

Related: How to Water Your Succulents

Read our step-by-step instructions if you want a more detailed guide on making sure you are watering your succulents properly.

Succulent Growing Tall But Not Wide

When a succulent grows taller but not wider, it is called etiolation and means that your succulent is not getting enough sunlight. In this case, the succulent is leaning toward the direction of the sun to get as much sunlight as possible.

When a succulent is looking for sunlight, signs will appear such as tall stems, spaced-out leaves, and top-heavy growth.

While it is less common, succulents sometimes shoot off aerial roots when they need more sunlight. The plant’s aerial roots are an attempt to absorb more light from as many places as possible.

If your succulent feels, for some reason, that it might fall, it will send out aerial roots to prepare and help it stay stable as it grows.

This need for stability can be because of etiolation, where the plant is growing leggy and unstable. In this case, you may notice the roots growing downward, where they can anchor themselves in the soil and grow.

But it can also be a part of the succulent’s natural tendency to use nearby things as support. In their native habitats, succulents can use the aerial roots as structural support to climb nearby trees or plants.

Nutrient Deficiency in Your Succulent

If your succulent has not been transplanted for several years, your plant might also be searching for nutrients with its aerial roots.

Another reason your succulent might be nutrient deficient is if your pot is not large enough. If your plant looks too big for its pot, or if you notice other roots poking out of the bottom of your pot, it is time to re-pot.

Aerial Roots Can be Natural Growth

Remember, though, that sometimes aerial roots occur just as a natural part of biology. If you have tried adjusting all of the above potential problems, you may have nothing to worry about. These aerial roots may have just occurred – even if you are watering correctly and giving your succulent enough sunlight.

It is also possible that the aerial roots have solved the need that the succulent is trying to meet. For example, the outgrowth of aerial roots may have given your succulent the amount of water needed. Further adjustment to your watering schedule is unnecessary.

Pay attention to your plant and how it responds to the outgrowth of these roots to determine the best way forward.

Cutting Aerial Roots Off Your Succulents

The roots will be small and white or pink when they are young. Often, they will dry out and fall off on their own, but sometimes they do thicken as they mature. In the end, they may end up looking like a small extension of the plant if you decide to leave them intact.

If you choose to cut them off your succulents, use clean scissors or a knife to snip them. But know that if there is some issue with your succulent environment causing these aerial roots to grow, they will likely grow back quickly.

Another option other than cutting off the aerial roots is to cut a portion of the succulent off that is growing the aerial roots and propagate them. As we said above, these roots are the beginning of propagation in your succulent, so you can simply place them in succulent soil and let them take root.

If you want to propagate your succulent from aerial roots, wait until they are well developed. Then, cut them below the root zone before placing them in succulent specific potting soil and watch it grow!

Make sure your watering habits and environment are ideal for your succulent, and, if you want to, cut off the aerial roots to clean up the look of the plants.

If you have tried adjusting watering and sunlight, and your succulent is still growing aerial roots, this could be natural. It may not be indicative of any problem in your succulent’s care.

If you want to learn more about growing and caring for succulents, check out our expert guide for tips here.

Check out these other beautiful Succulents