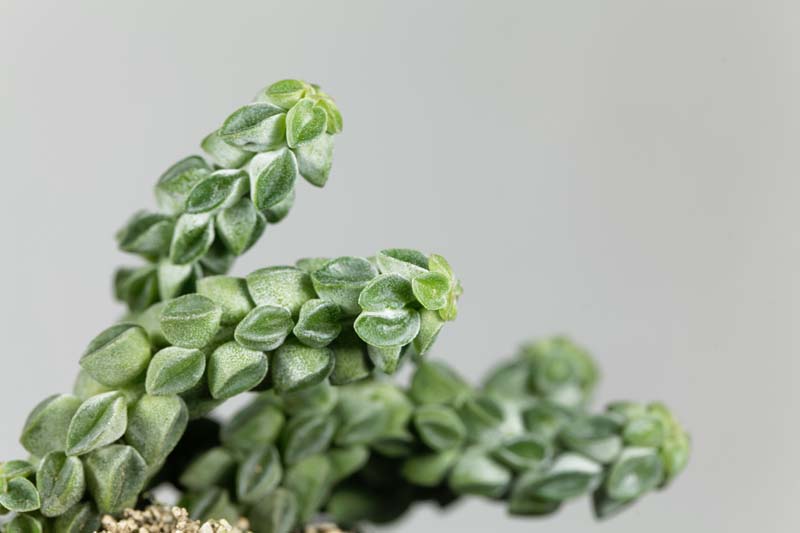 With many types of Peperomia Varieties available the choice can be hard. Peperomia are often called “radiator plants” because of their love of warm air. While peperomia have dense leaves that retain water and survive with little fuss, they are not all succulents. Most varieties of peperomia require more water than succulents, while others are considered “semi-succulent,” and grow well alongside cacti in the wild.

There are more than 1,300 species of peperomia, both annuals, and perennials. While some types of peperomia are entirely unique, others have been bred into hybrid subspecies. Peperomia come in a variety of colors, textures, shapes, and sizes. They are easy to care for, even if you don’t have a green thumb.

Peperomia grow in semi-vining or trailing varieties, tall, semi-upright forms with bright rosettes, and short bushes. Peperomia have lost some of their popularity over the years, leaving them an affordable alternative to other low-maintenance plants. Some peperomia are common and easy for you to find, while others are more rare, and some are even listed as endangered.

Peperomia Dolabriformis or Prayer Pepper is an annual that is also considered a succulent. It is native to the high country of Peru. It has pocket-shaped or hot pepper-shaped light green leaves. Prayer Pepper grows up to 2 feet in height. It is an upright, shrub-like variety of peperomia. You will notice them growing taller and fanning out, rather than climbing or falling.

Baby Rubber Plant is native to Florida, Mexico, and the Caribbean. This popular variety has dark green leaves and can grow to about a foot. Because it’s a trailing variety, it hangs beautifully in a hanging basket inside your home. The thick green leaves feel like a succulent, though it is not. However, like a succulent, Peperomia Obusifolia can tolerate a bit of neglect.

Peperomia Hoffmannii is a tiny trailing species of peperomia native to Central and South America, specifically Costa Rica, Panama, and Columbia. Its leaves are tiny, thick, succulent ovals. They are light green and trail along the soil surface in the wild or in your favorite pot. It makes a perfect small creeper for a terrarium and will hang over a small hanging container beautifully. An adult plant can grow to 40 inches in length and nearly 16 inches in width.

Raindrop Peperomia is a perennial native to the tropical forests of South America, so you will need to keep it in warm humid conditions. Its long branches grow upward, generally reaching less than a foot in length. However, in the right conditions, a Raindrop Peperomia can grow up to 18 inches in length.  and has wide, teardrop-shaped blue-green leaves that cup in the center.

Though Peperomia Serpens isn’t a succulent, it has succulent-like leaves that retain moisture. It’s a vining variety native to Central America and South America. Vining peperomia makes an excellent hanging plant for your home. Its branches can grow from 1 foot to 2 feet across. Some hybrids have white margins on the heart-shaped leaves, though most have froggy green foliage with pale green stems.

Cupid Peperomia is a soft green trailing peperomia variety. Its heart-shaped variegated leaves are green and yellowish-cream. In nature, Cupid Peperomia grows along tall trees, so it will enjoy living in your favorite hanging planter. It is semi-succulent and needs to be kept moist but not wet. Cupid Peperomia is native to Mexico, Central America, and South America. Its stems can grow 24-36 inches long.

Peperomia Nivalis is a perennial native to the dry regions of Peru. It’s a climbing succulent, small in size, growing to about 4 inches long at maturity. It produces fleshy stems with dark green oval leaves. The leaves are also thick and fleshy, and you’ll notice they like a succulent to the touch, though this variety is considered semi-succulent.

Peperomia Pellucida is an annual, shallow-rooted bushy peperomia growing to a height anywhere from 6-18 inches. It is characterized by succulent stems and it’s signature shiny, heart-shaped, fleshy leaves. Shiny Bush is native to the tropical regions of Asia and South America, and it’s been used in medicines by native tribes for centuries. It has been thought to treat abdominal pain, abscesses, acne, boils, colic, fatigue, gout, headache, renal disorders, and rheumatic joint pain.

Ivy Peperomia is a perennial native to Brazil. Though it initially grows erect, it can trail off at maturity. Its silvery, heart-shaped, broad leaves grow to about 1½  inches while its branches can reach 20 inches long. The semi-succulent leaves are corrugated and darker colored at the base than the tip.

Ivy Peperomia has a leaf-stalk that is red or pink, and it can grow white flowers with spikes, and you may see them bloom during summer and early autumn.

Peperomia Rotundifolia is an evergreen perennial with small green leaves that is indigenous to the tropical rainforests of South America. Other common names for Peperomia Rotundifolia are jade necklace, trailing jade, creeping buttons, and round leaf Peperomia. Trailing Jade falls somewhere between trailing and vining, and it will grow beautifully, up to a foot in length, in your hanging planter.

Felted Peperomia is native to Brazil, and it is named after the soft appearance of its leaves. Its heart-shaped foliage is covered in small white hairs meant to protect itself from the burning sun during a drought. You will find that Felted Peperomia can survive a variety of growing conditions and even a little neglect. Most Felted Peperomia grow from 6-12 inches tall. Bushy and semi-upright, Peperomia Incana grows best inside your well-draining pots or hanging planters in warm, semi-humid to humid conditions.

The Hope Peperomia is a hybrid, and therefore it is not indigenous to any area. Its parent plants are both native to tropical regions of South America. It’s a trailing, succulent variety that will grow nicely in your favorite hanging planters. Its foliage looks like a four-leaf clover with subtle stripes, and it can grow anywhere from 6-20 inches in length.

Peperomia Japonica is a perennial known for its petal-like texture and coin-sized, bright green leaves. Its stems vary in color from green to red to pale pink. Peperomia Japonica is a miniature vining variety, perfect for terrarium enthusiasts. You can grow Peperomia Japonica to about 4–6 inches tall before it starts trailing. Then its vines grow tightly together, giving it a bushy look. Though it is not a succulent, it is low maintenance and very versatile. Peperomia Japonica grows well indoors in warm, moderate moist conditions. It’s native to tropical areas of Southeast Asia including China, Japan, and Taiwan.

18. Peperomia Prostrata or String of Turtles

A String of Turtles is a tiny succulent-like peperomia native to Brazil. It thrives in a climate that is warm and moderately moist. A String of Turtles is durable and perfect for beginners. The height of the plant is approximately 1 inch to 4 inches at maturity, and its width is approximately 4 inches. This vining variety may form a thick mass along the sides of a pot, and it grows beautifully cascading over the sides of your hanging container. Its green leaves white veins are patterned like turtle shells.

Peperomia Asperula is a shrub-like variety that can grow up to 12 inches in length. It is considered a succulent, and it’s native to the dry regions of Peru. This perennial grows tall, with glossy green leaves that are folded, giving it a unique appearance. The upward pattern of the leaves is star-shaped, and it grows well in dry conditions and loose soil near cacti.

Watermelon Peperomia is as popular as it is rare. You may have trouble finding this stunning plant in stores, but they are fairly available online. The foliage on the Peperomia Argyreia is rounded and fleshy, patterned with dark green and silver markings that look like a watermelon’s rind. It is native to Bolivia, Brazil, Ecuador, and Venezuela. Watermelon Peperomia can grow up to 12 inches tall and is a tall, semi-upright variety.

Bamboo Stalks are another rare but sought-after peperomia. Its small, stubby leaves grow on tall, semi-upright stalks with long stems.  This tiny species only grows to about 8 inches. It is another peperomia that you can enjoy in a terrarium, or as a nice addition to a fairy garden. Bamboo Stalks are easy to grow and care for. Their native habitat is the Amazon Rainforest.

Itsy Bitsy Peperomia is another rare, miniature variety. Native to Jamaica, this vining peperomia has lush green leaves with red undersides. It generally reaches a height of 4-6 inches and a width of 6-12 inches. They grow well in terrariums or hanging planters. While Itsy Bitsy begins bushy, your humidity-loving plant will eventually fall and vine.

Peperomia clusiifolia is a succulent native to southern Florida and parts of Central America. It can grow to 6 inches when it reaches maturity, and the long vines can trail up to 10 feet. Ideally, you should plant it in a hanging basket. You might find the Peperomia Clusiifolia being sold under the names “Peperomia Tricolor” or “Ginny Peperomia”. It has floppy, elongated, wavy, and variegated leaves with red edges.

Peperomia Monticola is an upright perennial that grows up to 4-8 inches. It can be found in the wild growing in the mountains of Mexico. This rare peperomia grows best in warm, tropical conditions. It has long stems with perfectly round, dark green leaves. Peperomia Monticola is a miniature variety, growing to only about 5 inches in length. You will notice mouse tail-like flowers with little, fleshy petals when it blooms.

Peperomia Hutchisonii is another extremely rare peperomia, natvie to the mountains of Peru. The thick, olive green, and heavily textured leaves look like oyster shells or tacos. They are found in hot, dry areas growing alongside cacti. It’s an upright growing peperomia, though its thick leaves touch the dirt where it grows in the wild, and it may do the same in a pot in your home.

Peperomia Eburnea is a rare Ecuadorian native plant with stunning, velvety green leaves that are long, pointed, and smooth like a miniature philodendron. Peperomia Eburnea is a vining variety with subtle stripes on its foliage. It will do well in your terrarium, and it enjoys moist, mossy soil. This tiny variety grows best in warm, humid conditions.

Peperomia Paradoxa is native to Ecuador. It has spade-shaped green leaves with reddish veins growing on red stems. It grows upward, sprouting leaves on each side as it grows. This peperomia is rarely seen, and there is no record of it currently being propagated. Peperomia Paradoxa was only recognized a few years ago as a separate species of peperomia. Few exist in the wild.

Peperomia Columella is sought-after by plant lovers but is endangered in the wild. It has upright but slightly floppy stems that grow small, thick, alternating leaves up a column. Occasionally, this deep green peperomia flowers with stalks that look like empty corn cobs. Peperomia Columella originates from the desert of Peru and other areas of South America. This plant is a beautiful species that grows on steep cliffs. This species is also known as Columnar Peperomia or Pearly Peperomia.

Peperomia Fagerlindii, otherwise known as Creeping Hearts, has small bead-like leaves. It’s a vining variety with purple stems and green leaves that make a striking combination. This variety is similar to a succulent but needs higher humidity levels to thrive. Like many other Peperomias, this one also comes from coastal areas of Ecuador. If you are able to find Peperomia Fagerlindii, consider yourself lucky.

Check out these other beautiful Succulents